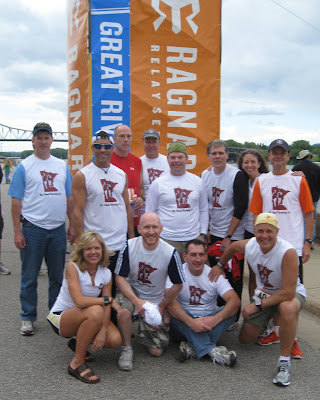 I ran the Great River Relay for the third year in a row. This year was the 4th year of the race. The start was changed to Winona from LaCrosse and the finish was at Boom Island, Minneapolis. The route is up the Wisconsin side of the river to Stillwater and then down the MN side and over to St. Paul and up the river to Minneapolis.

You can search for other blogs that give very detailed accounts of the race. I don't feel like typing very much today so mine will be relatively short.

There were 216 teams that finished. Most were 12-person teams but several were ultra teams of 6 runners. Based on the team's estimated average pace, starting times were assigned from 7am to 4pm. I was on a 3pm team as were 9 other teams. 5 teams started at 4pm. There were no 2pm teams so you may see how this is going.... We started with other teams that were mostly faster than we were. A couple of teams were slower. The fast runners got ahead of us quickly and all the other teams had at least a 2 hour head start. The effect of this is that we were essentially running alone. It wasn't until the next morning when we were starting to catch earlier teams. I run faster when I'm chasing someone and it was my third leg when I finally saw a runner in front of me. I got so excited that I started running faster (sub-7:00 pace) and blew by the gal like she was standing still. A half a mile later I was done for the race. 18.9 miles total.

I managed to charge my Garmin before I left for the race and recorded my runs: Leg 2, Leg 14, and Leg 26.

I had a great time with my friends and although I slept for only 5 minutes total, I managed to stay awake until 8pm Saturday night and can't wait to run it again next year.

NONE of my running friends have switched over to thinking of running this as an ultra but I have a year to work on them. :-) Even if I convince a few of them, I'm sure to have openings on my team. Keep me in mind if you are interested in running with me next year.

I charged my Garmin 310XT last night because I'm leaving in 1.5 hours to run the Great River Relay from Winona to MPLS. I run less than 20 miles so it will be only 3 hours of running. I just took my Garmin off the charger and it's 0% charged. Wonderful. I have it on the charger now and I'll take what I can get.

There are worse things than just running by feel.

Next race coming up is the Great River Relay. Third year for me and this year the start was changed from LaCrosse to Winona. Twelve runners per team and a 195 miles to cover. This year we plan to average a 7:45 pace and we have a chance if the weather is reasonable. The only thing working against us is that one of our runners had to drop due to a bad knee so we have one Van with only 5 runners.

Anyone out there up for the Fun and Challenge of joining my team for this race? Let me know. We (both Vans) are meeting in Woodbury at 11am Friday to head out to the start. My team has a 3pm start time so there will be 200+ teams in front of us, giving us plenty of runners to pass. :-)

I'm still in Garmin 1st grade. I haven't learned the buttons by position yet. I mean the lap and start/stop buttons. After stopping for some water this morning we were going to take off at a fast pace. I took off and meant to push lap but hit the start/stop button. I was wondering why my distance wasn't updating. Ugh. I hit the start/stop several times and then hit the lap button. I'll learn. This was about 5 miles into a 9 mile run when we picked up the pace. I looked at my splits for those 4 miles (Franklin Bridge to Ford Bridge on the east side) and they were 7:34, 7:48 (St. Thomas hill here), 7:23, and 6:56 to finish. A good solid run for me.

An hour ago I had the Garmin linkup and upload to garminconnect.com via a wireless USB attachment. I logged into the website and saw my workout was NOT there. Huh? I looked at the status of the Garmin software and see there was a problem uploading to the Garmin server. Ugh. I have a setting in the software to delete the exercise from my Garmin after uploading it. You see what happened.... the software uploaded my data and then deleted it from my Garmin before verifying the upload was good. Oh well, I changed the setting and I'll deleted the data off the Garmin myself from now on.

Next challenge.... figuring out how to get a quick satellite lock after stepping outside to run.

I'm behind in my marathon training. Today I ran 18.5 which is my longest run since the Twin Cities marathon last October. My body handled it just fine. Overall a sub-9:00 pace which is a very good long run pace for me. I have updates on two things today:

1) Heel lifts. I have my new vinyl heel lift and I did not tape it to my shoe insert. I was waiting to see what happened when my shoes got wet. Well, they got wet today because it was raining for most of the run. Around mile 11 the lift started sliding forward in my shoe so I stopped and took it out. That was confirmation that I definitely need to tape it to my shoe insert.

2) Garmin 310XT. I can't give a good review since this is the first GPS I have owned and since I have only used it once. It may become a future favorite of ultra runners since it has a maximum battery life of 20 hours. I don't know how the display compares to other models but this one can display up to 4 data fields simultaneously. I think there are 4 different displays you can scroll through. It will take me some time to figure out what I want to display on them and how many displays I want to use. The only display configuration I know I want displays: current pace, current heart rate, average pace, distance. I will need one with timers/clocks too which I may set up with: lap time, clock time, time so far, and distance. I will figure that out as I run more and think of data that I wish I could see during the run.

It has a configurable auto-lap option which I set to be every 0.25 miles. This is configurable to anything you want. I also had it display lap-pace. My idea was to get a current pace that is an average of the current lap so it would give me my pace that is an average of up to my previous quarter mile but not as 'instantaneous' as just displaying current pace. I didn't like it making a new lap so often so I'll switch it back to every mile. Like I wrote earlier, I'll figure this out as I run more. So far, so good.